Emollients are agents that help the skin maintain a soft, smooth and elastic appearance. The function of emollients is that they can be retained on the surface of the skin and act as a lubricant within the stratum corneum. It usually fills the space on the surface of the skin, replaces the lipids lost within the stratum corneum, reduces scaly skin and improves the appearance of the skin. Emollients include three types of emollients: emollient cream, emollient milk and emollient lotion. Their main ingredients are oil esters and waxes oily agents, advanced alcohols, emulsifiers, humectants and deionized water, and auxiliary ingredients are nutrient fillers, preservatives and fragrances. Some also add chelating agents, fungicides, thickeners, solubilizers and powders.

The cream contains more oil, generally does not have liquidity, the texture is relatively thick, can form a protective film on the surface of the skin, the water firmly locked, with a stronger moisturizing lock effect, so for dry skin people very suitable, moisturizer should be used after the lotion, after using moisturizer does not need to use the cream. Lotion is a liquid cream skin care product, so called because it looks pure white like milk. The lotion has a good emollient effect and also has a moisturizing effect, especially suitable for dry spring and autumn, and if the skin is neutral, it can also be used in winter. When used in spring and autumn, in addition to the emollient and moisturizing effect, it can also isolate the outside dry climate, prevent the skin from losing moisture too quickly, to avoid dry skin, cracking, peeling, is a must-use skin care products when going out in the dry season. Body lotion, a type of lotion, deeply moisturizes dry skin and replenishes the daily loss of moisture. The natural moisturizing factor strengthens its natural moisturizing layer from within, and the special oil-containing formula gives you a little more moisture. The moisturizer quickly and deeply moisturizes the skin, restoring it to softness, lubricity and radiance. The moisturizer aptly meets the needs of oily skin and is the ideal skin care product for oily skin.

Currently, emollients are used in three different areas, namely skin care, hair care and oral care. Emollients are ingredients in certain skin creams and cleansers that keep the skin soft, smooth and supple. They stay in the cuticle, the outermost layer of the epidermis, and function as lubricants. Emollients for hair are usually hydrophobic oils that form a film on the surface of the hair and can also act as anti-wetting agents or sealants. They reduce tangles by smoothing and flattening the surface of the cuticle and also add shine to the hair. Effective emollients can help keep oral bacteria away from the mouth and enhance moisturization. European Commission expects euro area GDP growth of 1.7% in 2017 and 1.8% in 2018 (1.6% and 1.8% in the Winter Forecast). GDP growth in the EU as a whole is expected to remain constant at 1.9% in both years (1.8% in both years in the Winter Forecast). Skincare and toiletries remain its most important product categories, followed by hair care and fragrances, so there is a stable demand for products with a complete chain. The U.S. economic outlook is healthy according to the key economic indicators. The most critical indicator is gross domestic product. The GDP growth rate is expected to remain between the 2 percent to 3 percent ideal range. Unemployment is forecast to continue at the natural rate. There isn't too much inflation or deflation. That's a Goldilocks economy.

China’s GDP growth, consumer confidence and other indicators of economic activity were somewhat better than expected in the first quarter of 2017. Therefore, the upgraded outlook, with GDP forecast to rise by 6.6% in 2017 and 6.1% in 2018.

Economic growth is projected to edge up to 1.4% in 2017, aided by stronger international trade in Asia and fiscal stimulus. Although fiscal support is expected to fade in 2018, labor and capacity shortages and record-high corporate profits will support employment and business investment, keeping growth close to 1%. Headline inflation will reach 1% by end-2017, due to ongoing monetary easing. The primary deficit in 2018 is projected to remain well above the government's benchmark of 1% of GDP, leading to a further rise in the ratio of government debt to GDP. To sustain confidence in Japan’s public finances, setting out and implementing a more detailed consolidation path, including gradual increases in the consumption tax rate, is a priority. Continued structural reforms to boost productivity and employment, especially of women, are important to support inclusive growth. Faster growth is essential to stopping and reversing the run-up in the public debt ratio.

After a period of development, the Emollient industry is in a mature period, with a fierce competition institution. Top 3 companies are covering 37.30% market share. High-end market presents a monopoly and low-end markets are highly fragmented. The emollients market is majorly driven by the trends in the cosmetic, skin care,  industries. Moreover, rising awareness about personal grooming and rapidly changing lifestyles are further enhancing the emollients market worldwide. Basically, these are non-cosmetic moisturizers that are readily available in the form of gels, ointments, lotions and creams. Also, in countries like Indonesia, South Korea, Vietnam, and Brazil, rise in the purchasing power for Oral Care and personal care products is likely to drive the emollients market globally in the projected timeframe. Furthermore, online distribution channels and E-commerce have helped the personal care and cosmetic producers to spread their distribution channel and customer base. This eventually results in the growth of the global emollients market in the forecast period. Revolution in these industry is projected to further open new opportunities for the emollients market worldwide in the coming years. The IMF forecasts global GDP growth of 6 percent in 2021, falling to 4.4 percent in 2022. The Chinese market's 2021 government work report set a target of GDP growth above 6%, but the market generally expects the Chinese market's economic growth to reach 8% or more this year. the IMF has this time raised the Chinese market's economic growth forecast to 8.4% this year. But the global recovery is incomplete and uneven, and despite a stronger-than-expected recovery in the second half of 2020, GDP in most countries will still be significantly below the pre-epidemic level. 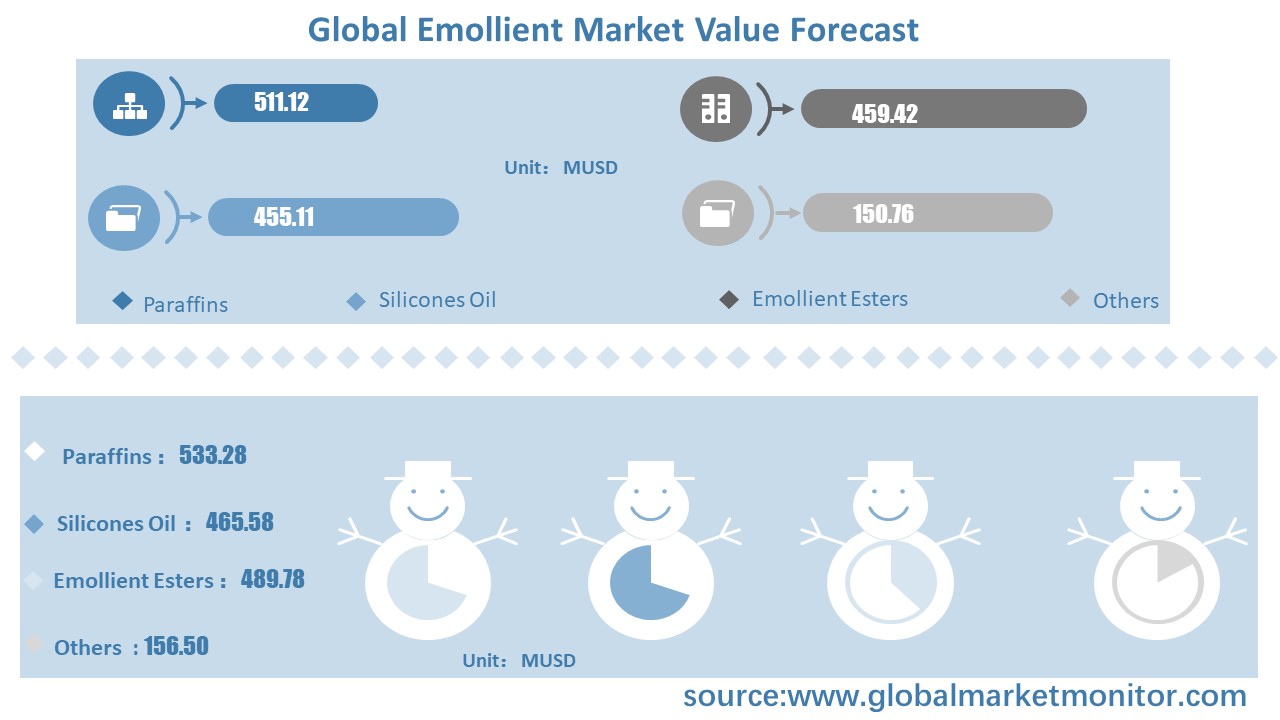